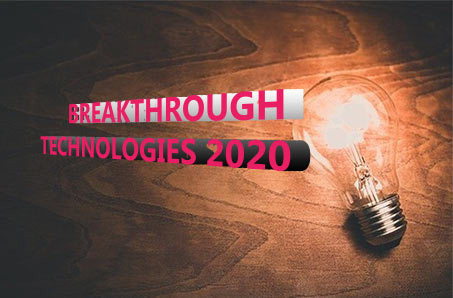 The famous Tech University presents 10 latest developments in technology that are about to break through – and will soon shape our lives.
Every year, the prestigious Massachusetts Institute of Technology publishes a list of the most promising technologies. The university is not simply looking for Gadgets, but for technologies that will sustainably change and fundamentally shape our way of life and working in the future – “making a real difference”. Here is the selection of the year 2020.

An Internet you can’t Hack

Researchers from the Delft University of technology are working on a network that connects four cities in the Netherlands completely with the help of quantum technology. This network has a significant advantage over the conventional ones – it cannot be hacked.
This means that messages sent over such a network will no longer be vulnerable to attacks – they are absolutely secure. The Dutch researchers ‘ technology is based on a quantum behaviour of atomic particles. These photons cannot be read in secret without disturbing the contents.
There is another challenge: the particles are very difficult to transport. By the end of the decade, however, the operation of a reliable network should be possible.

Rare diseases are often caused by a DNA defect. This can hardly be alleviated with generally available drugs, often the – rare – affected are left to their fate. Great hope lies in genetic medicine. She has created a new generation of drugs tailored to a person’s individual DNA.
The development of gene drugs has improved in recent years. They can replace or edit genes, which means they work like an eraser that can erase incorrectly developed genes. These drugs are also developed and programmed with the support of digital Tools – because high computing power is required to process DNA.
But there is a catch: The drugs are very expensive, because a whole Team is working on the development, but only a single Patient can benefit from it.

With its” global digital currency ” Libra, Facebook has set a stone in motion last June. As a countermeasure, China’s National Bank then announced that it would develop its own digital currency; other national banks want to follow suit. The SNB is also considering launching its own digital currency. Facebook’s idea has thus become a geopolitical Instrument.
China could become the first economy in the world to release its money in a digital version. It wants to create a counterpoint to its reserves, which consist mainly of US dollars. In the hands of the Chinese leadership, it is increasingly rare to pay with cash.
In the meantime, however, Facebook continues to fight for acceptance for Libra. Because various players are now turning on, digital money will take on an increasing weight in politics. It is a challenge not only for states, but also for banks, because it could divide the financial system.

New anti-Aging drugs are not – as one might first assume-about eternal life, but about stopping or slowing down the aging process in order to alleviate certain ailments. The focus is on diseases such as cancer, heart disease or dementia.
Three Swiss scientists are also involved in dementia research with the start-up Neuroimmune. You have researched the active ingredient Aducanumab, for the American Biogen intends to apply to the FDA for approval. But there are always setbacks in dementia research.
A company called Alkahest recently initiated components from the blood of young people to stop mild Alzheimer’s. Last December, researchers at Drexel University College of Medicine launched a cream that could actually slow down the aging of human skin.

Researchers have been trying to turn molecules into drugs for some time. Researchers estimate the range of molecules that could be converted into life-saving drugs to be around 1060.
This is more than all the atoms in our solar system. The development of a drug up to market maturity costs on average about 2.5 billion dollars. One reason for this is the difficulty of finding promising molecules.
Thanks to artificial intelligence, however, chemists can now research large databases of existing molecules and their properties more quickly and cheaply. This increases the possibilities of finding new active ingredients. In September, a team of researchers from Hong Kong and the University of Toronto showed that the strategy could work through synthesis: they presented drug candidates found by AI algorithms.
The use of AI in drug research is also a promising field for the Swiss pharmaceutical industry. For example, the researchers at pharmaceutical giant Novartis are constantly looking for new molecules for medicines.

Huge Satellite Constellations in All

It used to be very expensive to shoot a satellite into space. Today, tens of thousands of satellites can be operated relatively cheaply in space. Elon Musk’s company SpaceX plans to launch 4.5 times more satellites into space this year than the entire human race in the last 60 years. It shot up over 120 Starlink satellites last year and plans to launch another 60 into space every two weeks this year. These should form a network in space that can be reached from anywhere.
But why do you need so many offshoots in space? For example, to enable people in the most remote regions in the poorest countries to access the internet. On the other hand, space researchers fear that the swarm in the sky could have a negative impact on astronomy research.
In addition, there is the fear that the pieces from outer space could fall back on our planet and cause destruction there. The near collision of a Starlink satellite with an ESA weather satellite in September 2019 was a shot in the bow and a reminder that humanity is not yet equipped for Star Wars-style space travel.

A Quantum Of Hope (Quantum Computing)

Quantum technology should revolutionize IT. The promises are huge, so are the problems. Quantum computers function completely differently than conventional computers. Theoretically, you can tackle certain problems that the most powerful classic Supercomputer would need thousands of years to solve.

Google offered an indication in October 2019: A computer with 53 Qubits – the basic unit of quantum computation-performed a calculation in three minutes that would have taken the world’s most powerful Supercomputer 10,000 years. IBM questioned Google’s claim, saying that the acceleration would be a thousand times at best. Nevertheless, Google’s Experiment could usher in a new era in which each additional Qubit makes the Computer twice as fast.
This sounds promising, but is still difficult to implement in practice: the more Qubits you produce, the more difficult it is to maintain your quantum state. Machines that can crack cryptography will need millions of Qubits. Until then, a few more years will pass.

Mini AI in your Pocket

Artificial intelligence also runs on our Smartphone – but it has a Problem: it requires a large amount of data and computing power. To achieve this, manufacturers rely on Cloud services. However, these not only generate high CO2 emissions, but also limit the speed and performance.
Tech giants and researchers are therefore trying to shrink AI applications so that they can function autonomously on one device without having to constantly access the Cloud. Meanwhile, a new Generation of special AI Chips promises more computing power in a narrower space. In May 2019, Google announced that “Google Assistant” will now be able to run queries on the Smartphone itself without accessing a Remote Server. Starting with iOS 13, Apple runs the Siri voice assistant locally on the iPhone.
Existing services such as voice assistants, auto-correction, and digital cameras are getting better and faster without the need to “call” the Cloud every time you need access to a Deep learning model. Data protectors could also enjoy the Mini-AI: data no longer need to leave the device to improve a service or function.
The big noise With digitalization, privacy is becoming more and more an issue that moves many citizens. This will be a major challenge in the upcoming census this year in the United States. The government must collect data from 330 million inhabitants, but at the same time keep the identity of the citizens secret. It must ensure that the information cannot be traced back to individuals.
She uses a Trick: she lets a” noise ” flow into the data. It makes people younger or older, whites are referred to as blacks, but the total number of persons raised is again correct. This so-called” differential ” privacy is a technique also used by Apple or Facebook to collect aggregated data without identifying individual users. Such procedures will become more important in the future.

Today, researchers can recognize that extreme weather events are a consequence of climate change. This is a relatively new development: at the beginning of the last decade, scientists were still hesitant to explicitly link a storm or typhoon to climate change.
In recent years, however, more studies have been conducted on the assignment of extreme weather events, fueled by improved instruments and techniques. On the one hand, precise satellite data helps to understand the processes in nature. On the other hand, increased computing power means that scientists can create simulations with higher resolution and thus carry out more virtual experiments. For example, after Tropical Storm Imelda, a team of researchers was able to announce after just ten days that climate change almost certainly played a role.
This information is important because it gives us an Input on how we should build our cities and infrastructure in the future to cope with the consequences of climate change.