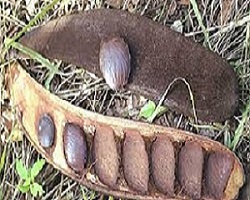 This study was on oxidative stress status of rat fed with Pentraclethra macrophylla, otherwise known as African oil bean seed oil in English or Ugba in Igbo. Sixteen male rats were distributed into four groups. 1 (control), then group 2, 3, and 4 as test groups. They were fed with their formulated meal (5%, 10%, 20% inclussions) for 28 days. Group 1 was the control and were fed with the normal feed, while group 2, 3 and 4 which were the test groups were fed with test feed formula.. The parameters determined were MDA concentrations and catalase activity. Serum MDA significantly increased (p<0.05) while the catalase activity significantly decreased (p<0.05). This finding may be clinically significant to individuals with predisposition to increased generation of reactive oxygen species (ROS) and other degenerative diseases.

Ugba also called ukpaka is a popular food delicacy in Nigeria especially among Igbo ethnic group. It is rich in protein and is obtained by a solid state fermentation of the seed of African oil bean tree (Pentaclethra macrophylla Benth).
The natural fermentation of the seed which at present is still done at the house-hold level, renders the production nutritious, palatable and non-toxic (Enujiugha, 2002).
Its production, like many African fermented foods depends, entirely on mixed fermentation by microorganism from diverse source.
Pentaclethra macrophylla Benth is a large woody plant abundant in the rain forest areas of west and central Africa. It’s origin in Nigeria is believed to be around 1937 (Ladipo, 1984); where it is found in the South Nigeria, (Mbajunwa et al., 1998).
―Ugba‖ Pentaclethra macrophylla Benth belongs to the Family Leguminosae and sub-family Microsoideae (Keay, 1989 and NFTA, 1995).
Ugba seeds are irregular and oval; they are flat, black and hard pods. It is composed of oil, protein and small amounts of carbohydrate (Obeta, 1982).

(i) To determine the concentration of Malondialdehyde (MDA, which indicates the peroxidation status) and

(ii) The activity of Catalase (a marker of antioxidant status) in the serum of rats fed graded doses of African oil bean seed meal.

Get the Full Material

DESIGN AND IMPLEMENTATION OF AN ONLINE BANKING SYSTEM

BUDGETING AND BUDGETARY CONTROL AS TOOLS FOR ACCOUNTABILITY IN GOVERNMENT PARASTATALS

BUDGETING AS AN INSTRUMENT OF INTERNAL CONTROL IN A MANUFACTURING ORGANIZATION

INTERNAL CONTROL AS AN AID TO ACCOUNTABILITY IN THE PUBLIC SECTOR

COMPARATIVE ANALYSIS OF THE PERFORMANCE OF JOURNALISTS IN GOVERNMENT AND PRIVATE OWNED MEDIA ORGANISATIONS
THE ROLE OF MICROFINANCE BANKS IN THE ALLEVIATION OF POVERTY IN NIGERIA.
Comment