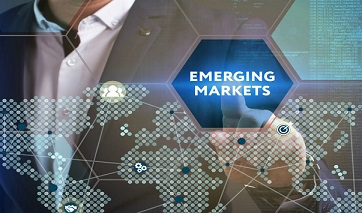 Technology is changing not only the way we live, but also the structure of the global economy.

Something is happening in emerging markets. In the past, their development was very closely linked to economic cycles, each lasting five to seven years. The current cycle there has only just begun and should illustrate how much the emerging markets are currently changing. Now it is no longer the raw materials, which determine the action, because their sector weighting is now only 14%, compared to 30% in 2010. The new magic word is I.T. The weighting of the I.T sector has increased from 15% to 25% over the same period. Trends of the 21st century Since the beginning of the 21st century, for example mobile payment systems and autonomous driving, give positive impulses to the I.T sector. In contrast, hardly anyone speaks of companies in the metal and mining industries that had seen growth in previous cycles.

Emerging markets continue to climb up the value chain. Technology is increasingly displacing traditional growth engines such as raw materials. As a result of rising incomes in emerging economies, domestic demand in emerging economies is growing faster than demand from developed countries.
Emerging market equities are increasingly benefiting from a good performance in the domestic economy and are driven by long-term growth sectors

Technology is changing not only the way we live, but also the structure of the global economy. This change is clearly visible in all emerging markets, especially in China.

China is profiting massively from the technology Revolution. The country is determined to free itself from dependence on the production of mass products and to increase the production and Export of valuable products. The key to this is a stronger use of technology. To achieve this, China is increasingly focusing on Innovation. Among other things, strong investments were made in research and development in the areas of robotics, artificial intelligence and telecommunications technology (5G). An expansion of the Online business, comprehensive digitalization and the global expansion of business activities via the Internet are also clear Trends. An example: mobile payment. At almost USD 12 billion, China has by far the highest penetration rate in the world in terms of volume. This makes companies active in e-Commerce attractive. At the same time, the automation of factories in China and abroad continues to progress. Here, too, China is one of the clear winners, as 85% of the robot components produced worldwide are manufactured in China.

As the production of the emerging economies becomes more valuable, so does the prosperity of the population. This in turn boosts demand in these countries. And here, too, a change is taking place – growth in the emerging economies is stimulated more by domestic than by global demand. This in turn benefits sectors characterized by long-term growth. On the winning side are sectors such as education, health and automobiles. This reflects the changing consumer behaviour of people in emerging markets.

Nowhere are these changes more obvious than in China. Consider, for example, the education sector. With rising incomes and the abolition of the one-child policy, the demand for high-quality private education services has increased. Today, around 20 million Chinese children take advantage of some kind of private education. This can be seen in the rapid growth of the market for support and tutoring courses in China, where spending more than doubled between 2007 and 2015. And a further doubling is expected by 2019, which makes education an interesting investment topic.

In our view, emerging markets offer very interesting investment opportunities. While developed countries continue to weaken, emerging economies are keeping global growth going, to which they now contribute 80%. Above all, China valuations in emerging markets are still attractive compared to those in developed countries. This results in investment opportunities.