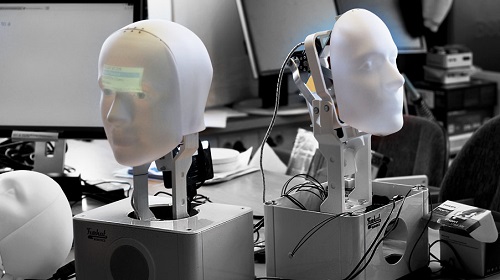 ROBOTICS – Many a time, people face a language difficulty whenever they visit an airport or railway station and check out for their transport. Can there be a special person for every language to guide people, or is there another way? Training employees of various origins, academics and grasping power is difficult for a human trainer. Such problems are often solved with a social robot.

Furhat Robotics was founded in 2014, Sweden, has designed a social robot with conversational artificial intelligence (AI). the corporate aims to revolutionise human-computer interaction with conversational robots which will help humans interact with machines the way they are doing with one another. This robot is often useful in various industries. It’s capable of conducting competency-based interviews, which may help recruiting firms to recruit candidates with the proper skills no matter their origin, colour, gender or nationality.

The robot is additionally capable of guiding people in an airport or a railway station in 40 different languages. This will reduce the human requirement for support services. Organisations may also upskill their employees with the robot, because it is capable of providing trainings in varied areas as well.

This futuristic robot features a humanly face and subtle gestures. It can create unique characters and their personalities. One Swedish hiring firm, TNG, is ready to use this robot to recruit people. The robot will have intuitive interactions with interviewees then convert the interactions into transcripts, which can move to decision makers. This will make sure the decision makers will have only the questions and answers, and their decisions won’t be influenced by gender, ethnicity and voice of the interviewees. The robot also holds the potential of interaction with multiple users.

READ ALSO: Artificial Intelligence: Do you know you can fly without a Human Pilot?

As of now, the organisation has discovered utility of the robot for recruiting, training and support services. The robot can specifically train employees on the way to turn down a difficult client or refuse a loan. It’s been deployed in such organisations as KPMG for dispensing financial advice, and has teamed up with Deutsche Bahn (railway company) for manning the desk at Germany’s Frankfurt airport.

There are numerous other applications for Furhat. Such robots give an insight into the wide potential of AI with robotics.