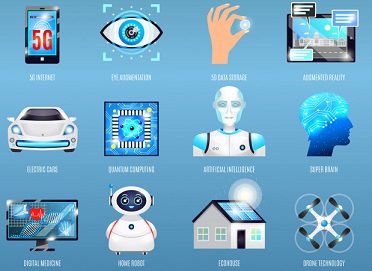 Which Trends will revolutionize the economy? This article is about useful tips to invest and earn in future technologies.
Artificial Intelligence, Cloud Computing, Autonomous Driving: It is worthwhile for investors to analyze which future technologies have the most potential – and which companies know how to use the innovations skillfully.

The technology market has changed fundamentally since the early noughties – and it continues to change almost every day: While companies such as Google’s parent company Alphabet, Amazon or Facebook are an integral part of everyday life, new companies are already in the starting blocks all over the world that have the potential to change the world as well as the technology giants from the USA. They are so-called disruptors.
At the same time, established companies are working hard to use innovative technologies to further develop their business models and products.
In the tumult of the technology market, it is not always clear which technological developments have the potential to assert themselves in the long term and to shape the world of tomorrow in a sustainable manner.

However, it can be crucial for investors to know which future technologies are really important on the one hand, and to be able to identify which companies are profitably using these technologies on the other. Those who invest specifically in future technologies can benefit from the following developments.
Frédéric Brunier, head of business & Technology Strategy for the DACH Region and Russia at the international consulting firm Accenture in Zurich, has identified three technology clusters that will shape the world of today and tomorrow: Cloud Services, Data and Data-Specific Applications, and so-called Intelligent Technologies.

The Business with the Data Cloud

Cloud Computing encompasses all applications that store data and information on an Online platform and can be accessed from anywhere, from any mobile device. Cloud Services include simple file locations such as Dropbox or Apple’s iCloud, which can be used, for example, to synchronize the address book on the iPhone.
Companies have also been increasingly using Cloud services for some time to store information securely in the “cloud”. “Providers of the corresponding infrastructure benefit from the increasing demand. The Cloud now has a permanent place in the everyday lives of companies as well as private individuals,” says Accenture expert Brunier.
Not only big companies are in the cloud. Many Start-ups were also only able to implement their new concepts through cost-effective access to Cloud Computing.

There are many providers of Cloud platforms. The most famous are the US technology giants Amazon, Microsoft and Google, as well as Salesforce and Oracle, which are also based in the United States. The German software giant SAP is also involved in the Cloud business, and Swisscom offers services in Switzerland, among others.

Data – The Oil of New Technologies

Another key factor for future technologies is data. They are practically the new oil-and always cheaper to have. “Big data analytics are important for many industries and companies to improve work processes, become more efficient and customer-relevant,” says Brunier.
Consumer goods manufacturers, for example, collect and use data to better understand their customers and their needs. And data is also playing an increasingly important role in the automotive industry: so-called Connected Cars are a multibillion-dollar business.
Almost all car manufacturers invest in data processing technologies to develop connected vehicles. The data is used to predict necessary repairs, to avoid traffic jams via navigation system or to warn if the speed limit is exceeded.
Autonomous driving, for example, uses the Internet of things, i.e. the networking of physical and virtual objects, as well as AI. Cars, for example, can now be networked with each other and can communicate with each other.
The Swiss Stock Exchange also uses Blockchain
Blockchain is also a data-driven technology. Blockchain is, in simple terms, a publicly accessible digital database. The Swiss stock exchange SIX is currently working on a Blockchain trading platform-it is scheduled to launch at the end of this year.

Intelligent Technologies comprise several innovations that are regarded as technologies of the moment as absolutely suitable for the future: For example; Artificial Intelligence (AI). Self-learning computers revolutionize factories, communication, office processes.
And they are driving growth: by 2030, AI-based applications are expected to generate an additional $ 13 trillion in global value creation, according to a 2018 study by McKinsey.
There are no limits to Machine Learning
So-called Machine Learning, i.e. machine learning, is also likely to become increasingly important in the future. There are hardly any limits to the fields of application – machine learning can be used to develop completely new anti-money laundering systems for banks or to process orders from online retailers.
However, all knowledge about the technologies of the future is of no use if companies are not able to use it properly, says Accenture expert Brunier. “Top decision makers are investing enormous sums in new technologies today. This does not mean, however, that they also exploit the full benefits of these investments.

This is partly due to the fact that many companies think in individual technologies – and not in systems. “Such silo thinking makes it difficult to exploit the full potential of new technologies,” says Brunier.
In other words, companies need to combine innovative technologies in order to be truly successful. “The technologies can be clearly distinguished from each other.

Together, however, they develop all their strength,” says François Rüf, head Data & Analytics at Vontobel. “Ultimately, the developments are all interrelated and always create new solutions, for example to increase efficiency.

“People and machines are also working together in the financial sector: Asset Management increasingly takes place on the basis of algorithms, whereby deep knowledge about the financial markets is still required, especially in crisis situations,” explains Rüf.

Limitless thinking is the key to innovation. This applies not only to technology, but also to boundaries between companies. Partnerships can be just as important as the clever combination of different technologies.
The German car-maker Volkswagen, for example, is working together with Amazon Web Services on its own Industrial Cloud. In the future, the data from all machines, plants and systems from all 122 factories in the group will be merged into this data – thus helping to achieve the productivity targets.
The British mobile operator Vodafone, in turn, now uses Whatsapp, a Chatbot and Apple Business Chat in addition to phone and e-mail.
However, there are positive examples that are also interesting for investors. One year ago, for example, the flavors and odorants manufacturer Givaudan from Vernier inaugurated a digital factory in Paris in order to test digital possibilities and accelerate developments there.
In August 2018, the unlisted perfume manufacturer Firmenich opened a digital laboratory at the Swiss Federal Institute of technology in Lausanne to use artificial intelligence to create fragrances. And pharmaceutical giant Roche has developed a so-called Tumorboard as part of its in – house Navify app ecosystem-a cloud-based Software that aims to make the treatment of cancer patients more efficient.

Looking for Stocks in the Healthcare Sector

In general, the health sector: This is where investors should definitely look if they want to invest in future technologies, says Patrick Kolb, fund manager at Credit Suisse Asset Management. “In healthcare, there are many routine tasks, most of which are still performed manually. These are likely to be gradually digitized in the coming years – robotics and automation are on the rise in the industry,” says Kolb.
He also knows that new technologies, especially in the healthcare industry, often generate fears: for example, the so-called Crispr/Cas9 technology, a molecular biological method for selectively cutting and modifying DNA. “The” gene scissors ” are controversial, because DNA can be manipulated with them. But the technology can also help to treat and eradicate diseases, ” says Kolb.
Smartphone Apps are also increasingly being used in disease detection and treatment. They use the sensors in Smartphones as diagnostic tools. Thus, the app CoughSense can detect tuberculosis via the mobile microphone, the Hema App can measure the hemoglobin level in the blood via the smartphone flash.
“Most of these Apps are still in the experimental stage. But in a few years, they could be part of the medical Standard. In any case, they haven’t been Science Fiction for a long time,” says fund manager Kolb. Novartis already offers an app for building up and maintaining lung capacity especially for people suffering from the lung disease COPD and Asthma.

Many Opportunities to Invest in Future Technologies

The opportunities to invest in future technologies are as diverse as the technologies themselves. Peter Camenzind, Head Platforms at Vontobel, advises that if private investors want to benefit from the opportunities offered by digital progress, they should do without the time-consuming selection of individual titles: “funds and certificates are the best way to cover the whole range of technical developments.” Especially since not only the usual Suspects are interesting.
In recent years, large US corporations have clearly dominated the technology industry. However, China is increasingly developing into a new innovation center. Chinese companies are now leaders, especially in the field of artificial intelligence and 5G mobile networks, as well as in online retail. Nowhere in the world do people buy so much per click as in the middle Kingdom. Online platforms such as Taobao, Alibaba and Wechat are correspondingly successful.
In the summer of 2019, China opened its own technology exchange Star Market, modeled after the US technology exchange Nasdaq. Technical progress is global-investors should take this to heart when investing.